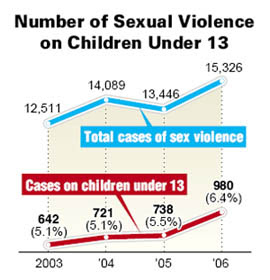 Child molestation is becoming a serious social problem with the number of cases of sexual violence on children under 13 increasing every year.

However, the figure does not show the actual situation well according to some specialists as the victims are young and cannot express what happened to them. Also not everybody takes legal steps against the assaulters. According to the Sunflower Children’s Center, a state-funded clinic dealing with child sex abuse cases, only 25.9 percent of parents of the 1,088 child victims take legal action against the offender.

Also the seven-year statute of limitations for crimes on sexual violence also hampers the victims from asking for charges to be filed. Related to this, the Korea Sexual Violence Relief Center submitted a petition to the Constitutional Court to abolish the statute of limitations on sexual violence and crimes last December and the proposal is now under study.
Currently, when a child becomes a victim of sexual violence, the parents or legal guardians can report the crime to the police, the sexual violence relief center, or the sunflower center.
The child will be asked a few questions and if she or he is ready to give statement, the center will provide the victim with therapy, video recording of the testimony as well as other medical and legal processes.

“Sexual violence against children is a serious crime as the trauma stays with the victim for a long time,’’ a consultant of the sexual violence relief center said.
The first ceremony for the “Day for the Elimination of Sexual Violence Against Children’’ will be held today by the child sexual violence prevention committee consisting of officials from the Ministry of Gender Equality and Family, the Commission on Youth Protection, and 30 other civic groups.

Feb.22 is the funeral date of Huh, an elementary school student who was sexually assaulted and killed by a molester last year in Yongsan, Seoul. The government said it will keep the day as one to hold a nationwide campaign to get rid of sexual crimes from society.
The ceremony will be held at a hall of Huh’s school with the minister of gender equality and family, the commissioner of the Commission on Youth Protection, lawmakers, non-governmental organization members and school officials in attendance.
The parents of Huh will give a memorial speech and the deceased’s schoolmates will give a commemorating performance. A declaration to root out child molestation will be made.
Also, the ministry will hold seminars and public hearings on the policies to prevent child sexual violence next Tuesday.

“We are aiming to make everyone aware of the danger of molestation or sexual assault happening to children. Huh’s death was a shock to everyone, and we will not let something like this happen again,’’ Seo Young-hak of the ministry’s Women’s Rights Promotion Bureau said.
Choi Kyung-sook, the director of the Sunflower center, said that more structural support is needed. “The abolishment of the controversial statute of limitations, stricter punishment and mandatory education on molesters to prevent recurrences should be mandatory,’’ she said.