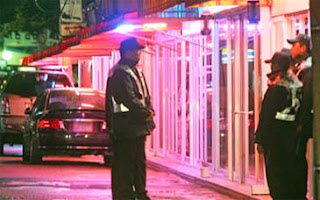 The supposed crackdown on prostitution that commenced in 2004, is said by many to have just run prostitution underground. I still recognize a lot of prostitution not so underground as you can see in the pictures displayed here. The windows on the right side of the photos are cathouses and the men standing in the foreground are police. The cathouses are not closed.

The major prostitution areas, the “massage parlors,” the call girls that advertise with little cards with their supposed pictures on them and of course the Room Saloons are all still open and all are still busy.

Many today are wondering whether the solution to the problem is to heavily regulate prostitution. Examples of such regulations include: mandatory HIV tests, licensing, zoning regulations, advertising prohibitions, “special vice taxes,” and severe punishment for those that don’t abide by the regulations. 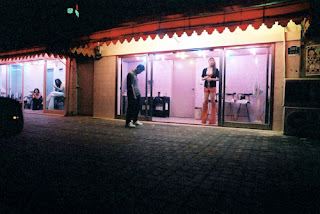 Since the passing of a strengthened anti-prostitution law in 2004 _ which officially ended the country’s traditional tolerance of sex buyers _ the number of red light districts has gone south.

However, it is becoming apparent that shutting down brothels isn’t enough, with the still-strong demand for commercial sex spawning a massive underground industry of massage parlors, girlie bars, hotels and Internet sites that provide easier access to sex for sale.

Last week, police in southern Seoul arrested the two owners of three massage parlors in Nonhyun-dong and Yoksam-dong for hiring prostitutes. They booked another 170 people, including 120 people who bought sex from the shops more than 10 times.

The customer list of the three massage parlors extends to over 200,000 people, police said, with each shop roughly averaging 2,000 to 5,000 customers per month.

“The customer list included lawyers, doctors, university professors, journalists, civil servants, soldiers, office workers and a former lawmaker. We can find virtually every profession aside from pastors, priests and monks,’’ said an official from the Seoul Metropolitan Police Agency.

“The shops were sophisticated in their marketing, and they provided discounts for people paying in cash. The real number of customers could actually be double of the number of names on the list,’’ he said.

Considering that sex buyers usually prefer to pay in cash, police believe the total revenue for Park’s shops to be significantly higher.

The other suspect, a 57-year-old identified only as Choi, earned 19.8 billion won in cash and credit card revenue through his massage parlor in Yoksam-dong since September 2004.

Yoksam-dong, including the streets surrounding the Renaissance Seoul Hotel, was one of the 24 areas in the country that police selected as intensive surveillance zones last year and that were monitored for underground sex trade. Law enforcement officials investigated the three shops and ordered them to close their business last year but the owners refused, police said.

The owners of the massage parlors competed for customers, police said, leading to unusual marketing programs and services.

The rooms at the massage parlors were differentiated by theme. There are “classrooms’’ with sex workers wearing girl school uniforms and “Vietnam rooms’’ in which the women wear the Southeast Asian country’s traditional attire.

The massage parlors promoted their services on Internet sites.

Adopting a “zero-tolerance’’ approach to the sex trade and the trafficking of women, the anti-prostitution law stipulates that brothel owners can be put in prison for up to 10 years with a maximum fine of 100 million won. The state can confiscate any financial gains acquired by selling sex.

Buying sex was also made a criminal offense punishable by up to one year in jail and 3 million won in fines.

In Seoul, the red-light districts in Yongsan, Chongnyangni, Chongam-dong and other areas are expected to be cleared up within the year through new urban development plans. Since the anti-prostitution law was passed, police have charged more than 40,000 brothel owners, pimps, prostitutes and customers.

However, sex transactions at massage parlors, bars, saunas, hotels and other businesses are growing, despite the government’s warning.

According to a survey conducted last year by the Korean Institute for Criminology, more than 60 percent of the 450 adult males who said they bought sex in 2005 said they used massage parlors, which are quickly becoming the center of the underground sex trade.