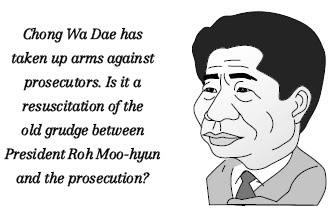 President Roh Moo-hyun fought prosecutors in his early days in office. A born controversialist, he volunteered to debate with young prosecutors on TV in 2003, though the goodwill event turned into a raw war of words.
Four years later, now in his final year, he seems to have taken up arms against the prosecution once more as he believes the country’s powerful investigative body needs to be changed.

In a speech on Tuesday, the president cited the press and the prosecution as institutions needing reform. “Our work for reforms has entered a final stage,” he said. “But there are some areas that need more change.”

Having sought to break away from the old authoritarian era when those with power and vested rights colluded, Roh takes pride in his achievements in reform and innovation of the private as well as the public sector.

Roh’s criticism of the prosecution came after a former Chong Wa Dae secretary had been cleared of charges in a recent corruption scandal surrounding the JU Group, the country’s largest network marketing company.

Lee Jae-soon, who was working at the presidential office as a detached prosecutor, was dismissed late last year after he was summoned by the prosecution for his alleged involvement in the scandal.

He was later cleared of the charges. But the prosecution came under fire after the investigators who interrogated him were found to have attempted to force him to give false testimony.

In a weekly Cabinet meeting Tuesday morning, Justice Minister Kim Sung-ho reported to Roh on the prosecution’s follow-up measures about that case and a small “court-like” situation ensued.

Minister of Health and Welfare Rhyu Si-min, one of Roh’s strongest loyalists, came out first with a straight censure. “I heard they say in the prosecution that one could become a hero if he or she challenges on Chong Wa Dae. Is that true?”

Roh quickly smoothed over the awkward situation as Kim remained at a loss. “I am okay even if the prosecutors target the government or the president,” he said. “But they should investigate only by legal means.”

In fact, Chong Wa Dae’s complaints about the prosecution are no fresh news at all. Roh appointed Choung Sang-myoung, who passed the 17th bar exam with Roh, as the prosecutor general. But little has changed.

Some presidential aides expressed their grievances about the law enforcement authority, which has questioned Chong Wa Dae officials in several cases including the Haengdam-do island development project and JU scandal but found no irregularities.

Critics interpreted the recent moves by the presidential office as Roh’s efforts to tighten discipline in government offices and agencies, especially the prosecution, to avoid becoming an early “lame duck” president.

Chong Wa Dae said that the president was just emphasizing the need for reform in the judiciary, despite his remarks creating a subtle controversy among politicians as well as prosecutors.

Over the past several years, some high-profile figures including former Hyundai Asan Chairman Chung Mong-hun and former Pusan Mayor Ahn Sang-young have committed suicide while being investigated by the prosecution.

Roh instructed his aides to do their best to help the pending judiciary reform bill get approval from the National Assembly and also come up with reform measures, such as audio and video recordings of the interrogations, according to his spokesman Yoon Seong-yong.

Whether it is a coincidence or not, some newspapers reported on Thursday that prosecutors are investigating a lawmaker of the Uri Party, who is known to be a close ally of the president.

Yoon said that Chong Wa Dae did not discuss the matter when asked by reporters if there was any discussion inside the presidential office. “We’ve already let go of the reins over the prosecution.”

However, few people expect that this is the end of the fight between Roh, a self-educated former human rights lawyer, and the prosecution, which he has regarded as in constant need of reform.