The Guidebook on Wage System Reform, published by the Korean Ministry of Employment & Labor, has sparked more interest, in the private sector, than the revamping of Korea’s wage system based on seniority. 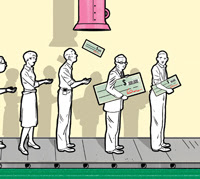 The major issue, in this regard, is if the Rules of Employment of a company may be amended, without violating the Labor Standards Act of Korea (“LSA”), when “wage system reform” is not consented to by a majority of the employees or the trade union.

Numerous Korean government agencies have successfully moved to a more merit-based promotion and bonus system from a strict seniority-based wage system.  The private sector has carefully watched this trend, because of public failures by noted international conglomerates. The private sector, to date, has been slow to move to a merit-based wage or like system because of these public failures.

The MOEL’s Guidebook on Wage System Reform (“Guidebook”) was drafted to be a guide for companies wishing to move from a seniority-based system to a system based on merit and/or job scope/responsibility.

Courts, recently, have moved to become more employer friendly.  However, without a nuanced approach to amending rules of employment, a nuanced understanding of Korean legal and political realities and a savvy and experienced local Human Resources guide – companies will, likely, run aground  in employment relationship issues.  A proactive and experienced team is necessary for success in Korea.  The ubiquitous teams are, not, always the best teams.

Please read an update of this issue at: Update to Korean Labor Labor Law: Guidelines on Korean Rules of Employment
___
Sean Hayes may be contacted at: SeanHayes@ipglegal.com.