Whenever I read a news item regarding Korean corruption, I have mixed feelings. Usually the article is based on the latest finding by a well-meaning NGO that focuses on corrupting influence of big business on government without adequately addressing the root causes or even the breadth of corruption. Korean corruption doesn’t limit itself to envelopes and car trunks of cash being paid by business people to government officers. 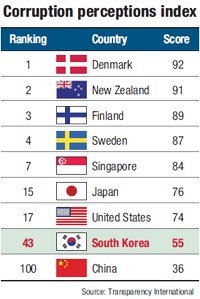 *The following article is a re-posting of an article by Tom Coyner.  The article first appeared on this law blog in 2012.  The issues remain the same and we thought this was an excellent time to repost this excellent article on an important issue for those doing business in Korea.

So one may ask oneself, “Can Korea end its many forms of corruption?” That is the essential question, and the obvious answer is “no.”

I don’t mean that as a cynical observation. Rather as much as I recognize Korean corruption having greatly disappeared from its much higher levels of thirty years ago, the very nature of Korean society precludes corruption from being significantly reduced from its present levels.

When I was a Peace Corps Volunteer in the Korean countryside of the 1970s, virtually everyone lived in poverty by US standards. Some lived in squalor, but the overwhelming majority lived simply and frugally. Those who were considered well off at that time and place would nonetheless have been considered to be poor by then American standards. However, the relatively well off often had an attitude that could be haughty given their well being was measured within the context of their villages and towns.

At the other end of the scale, Korean public servants were paid ridiculously low wages, as is the case of many developing countries. They actually needed outside income to live relatively comfortably and to send their children to schools and universities. Often, the only plausible means for this large societal segment was to receive “gratuities.” One could normally count on having to pay a pretty consistent ten percent as unofficial gratuity to get various matters handled. Eventually, the Korean government realized that low public sector wages were a poor value.

Today, Korean public sector workers overall get decent wages, steady employment and superior retirement benefits – so much so, the competition to get these jobs by often over-qualified applicants is quite severe. In any case, wealth, which many people may assume to the end goal of corruption, is only relative and not absolute. Rather social power, again as defined within one’s social context, is the real corrupting influence. And the corruption is not limited between government officials and business tycoons. NGO executives, particularly when the left wing is in power, find themselves in privileged positions; and unsurprisingly, as we witnessed under Presidents Kim Dae-Jung and Roh Moo-hyun, there was a ten-year spike in corruption involving NGOs.

If corruption was measured by money or goods, we may consider a limit on luxury handbags and gold watches. But the fact is, on the other extreme, if someone has ten gold watches and two dozen luxury handbags, etc., there will be a quest for even more. One may say the motivation is greed, but it’s obviously not greed for yet more handbags and watches. More likely these well off individuals are driven by envy, should there be anyone else possessing the same number or greater number of goods and of newer or higher quality or status.

The fundamental problem is that being a member of South Korean society is very much a status-conscious undertaking, partially based on insecurity as to whether any individual or family truly deserves its presumptive ranking. What is less controversial is whether a Korean is in possession of enviable goods or amounts of money. And to make matters even more competitive; success, achievement, and social ranking are more narrowly defined in South Korean than in many western and advanced societies.

Consequently, once an individual or family feels secure they are not in danger of being left behind from the mass average, they immediately recalibrate their insecurity so as to try to catch up to, if not lead, other people in the next higher levels of society.

Ergo, my conclusion is this: Some improvements in reducing corruption will likely be made by new legislation, regulations, enforcement, etc. But, until South Koreans essentially ease up on themselves and learn to be happier with who they are and what they possess, envy and insecurity will drive otherwise intelligent individuals to partaking in foolish acts — including corruption.

So can corruption be effectively reduced in large measure from present levels? Perhaps. Will we see substantial reductions? I’m doubtful.

On the other hand, South Koreans have surprised both the world and themselves many times over. At the same time, the causes of corruption rest on the bedrock of Korean cultural and group psychology fundamentals. At best, I can only hope matters may improve over time. And who knows? They just may.